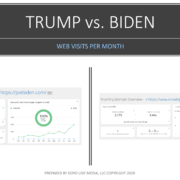 In 2016 I predicted that Donald Trump would be the next President of the United States of America based upon key performance indicators on the internet and some other key campaign strategies, that frankly makes this less about politics and more about a marketing contest.

Love him or hate him, from a pure marketing perspective he spent half as much as Hillary, masterfully played the media and Twitter, which led the way to his win. 2020 is turning out to be no different. Taking politics out of the conversation and making it more about a marketing discussion is difficult to do when you are talking about running for the most powerful position in the free world.

If there’s one thing for sure the combined spend by President Trump and former Vice President Biden is staggering, both combined will likely exceed $1-Billion dollars, that’s with a “B” people, before it’s all said and done. That’s a combination of money raised directly and then from outside groups.

So to understand the world we live in 80 – 90% of all your buying decisions start with online search, then turn to reviews and last but not least you then ask my opinion. Need proof, whether you are buying a TV, car or a cheeseburger, your last conversation with a friend probably went like this. I Googled (insert whatever), I read the reviews, what do you think???

A couple of other KEY FACTORS. Which I still cannot wrap my mind around. President Obama was the first president to really embrace social media as a way to connect with the voters, effectively winning his first 4-years by leveraging the power of Facebook to connect with voters. The Republican Party at that time in the 1st and 2nd election refused to adopt these online strategies and the results obviously showed that digital, internet, social is all here to stay and going to play a big role in the marketing of a candidate.

It’s also fascinating that how much the Democratic Party gained with social media and digital during the Obama Administration that Hillary all but abandoned an online presence and Joe Biden is currently trying to play catch-up in a big way. I’ve taken some time to break down in an objective look at data trending behind the 2020 United States of America Presidential Election. It’s something again that I did in 2016. Looking at Google, web traffic, social media and even some traditional media.

I find the polls to NOT be reliable, there are so many variables with the sample sizes, who is being contacted, who is conducting the polls and for which reasons, I can go on…

We now have the power of being able to tap into data. That’s effectively what I’ve done here…I also have another belief when it comes to the presidency. Because of the Electoral College (and that’s an entirely different debate) the last several elections have come down to a 49-51 split. That’s just the reality. I fundamentally believe the right and left have already made up their minds, and have done so a long time ago. As an independent, I tend to wait on my decision based upon a number of factors that impact my house. However, there are many people out there that are in the middle or don’t have their mind made up yet.

That’s why there are a billion dollars being spent on the election, to win the middle. And those my friends is where the election is won and lost. And that’s not a political contest, that’s a marketing conversation. Some want to vote for a winner, others vote for whichever name they hear the most often. That’s why when you walk into a polling booth and you vote for a school board member you oftentimes remember the last yard sign. It has everything to do with a cheap form of advertising and not about what the candidate is running on.

Google also owns 80% of web traffic, Facebook is like 1 out of every 5 views of the web, so it’s a really big deal and it’s backed with data. In 2016 Donald Trump dominated Google Search. How do I know?

Well it’s all very simple, see Google is more than just a search engine that tells you where to get a cheeseburger. There are a ton of resources for the consumer and businesses. This is a situation where it’s both. You can go to Google Trends.

Once you are there you can type subjects in to see what’s trending and the really cool thing is you can compare the amount of search traffic on Google over a time period in specific regions to another. So in this instance it’s easy to type in Trump and Biden. It’s very apparent right now what’s going on, and it’s very similar to 2016. Now not all search is good search.

Like for instance both Trump and Biden get searched for policy, presidential stuff, Trump because he’s the president and then there’s the negative stuff that gets thrown into the mix. So when you hear the news saying that one candidate is up or down in the polls, well you might not be getting the full story. See the thing about Google and these other mechanisms is this, GOOGLE IS ABOUT THE DATA!!!

Google is not about the interpretation of the data, nor is it subjective. As of right now Trump on Google Trends is significantly outperforming Biden in web-related searches on Google.

We encourage you to go to Google Trends, do your own research!!!

WHO’S REALLY WINNING IN THE REGIONS?

Another interesting find would be to look at the subregions… 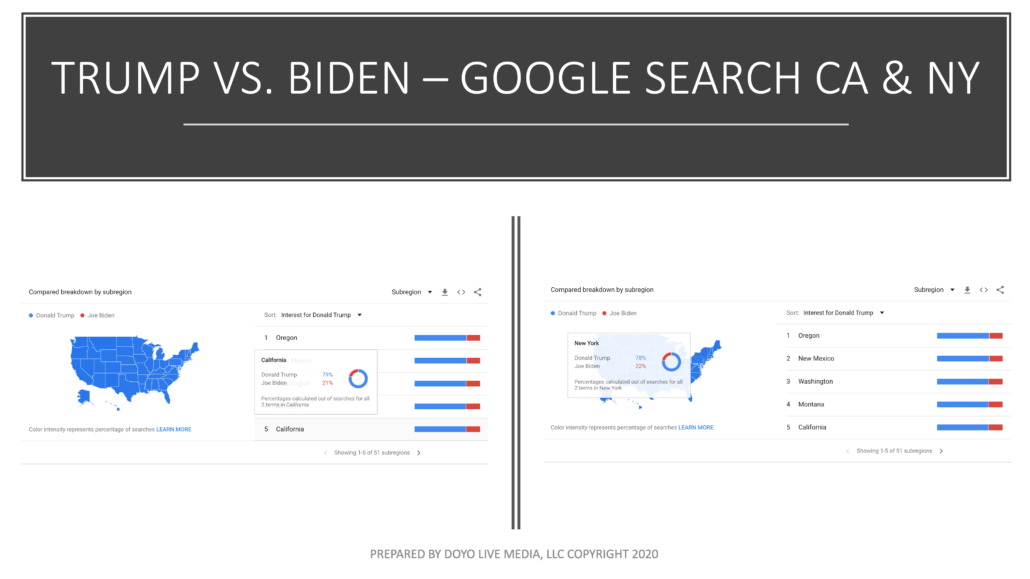 So either the data gives us a false positive because it’s highly anticipated based upon historical perspective and the current landscape that California and New York will be won by Joe Biden. However If you look at the search traffic for each state it’s significantly slanted to Donald Trump. Which you then think is the rest of the data skewed as a model or is the possibility that Trump will carry those states.

In this instance, I believe it’s a little of both. Other KPI’s (key performance indicators) give way to the current president. The search traffic in these states could likely be an indicator of the NOT so good web traffic.

There are certain states for instance like Colorado, where Donald Trump has all but abandoned his efforts because he has little to no shot to win and conversely, Joe Biden as well in some of the southern states, so before you get your shorts all in a bunch, tactically that’s nothing new.

Not only that, I have a fancy tool, most of us in digital marketing do, to analyze how much web traffic a website is getting. Which I recently ran this and have been observing over the past month or two. 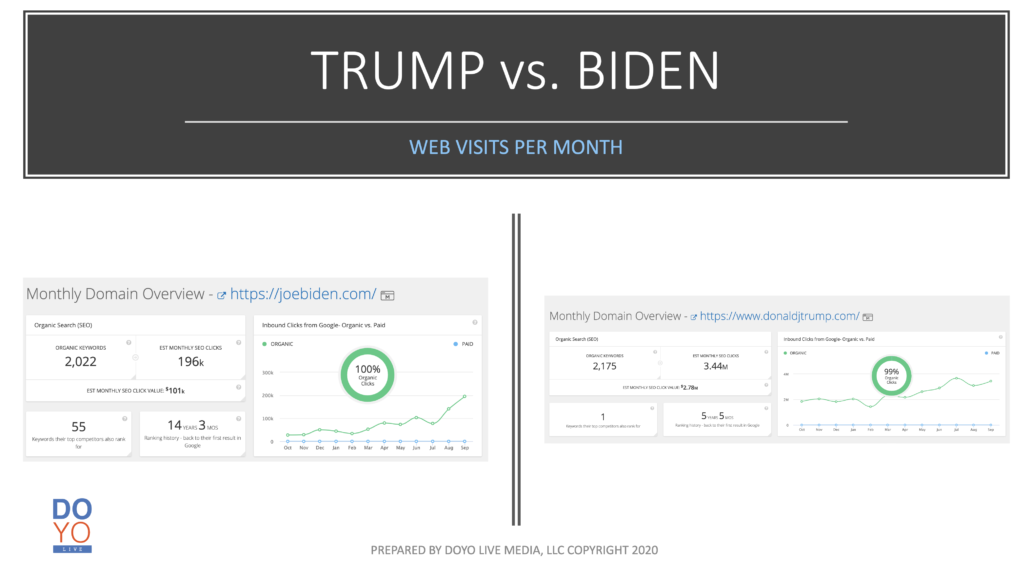 Now the interesting thing is that both Trump and Biden have other sites, maintained by special interest groups, however, if you just look at the official websites for both Trump and Biden you would find that Donald Trump is getting 3.5-million visits per month vs. Joe Biden’s 250,000 visits per month. That’s SIGNIFICANT…Like super significant, like not even close or off by 10%. 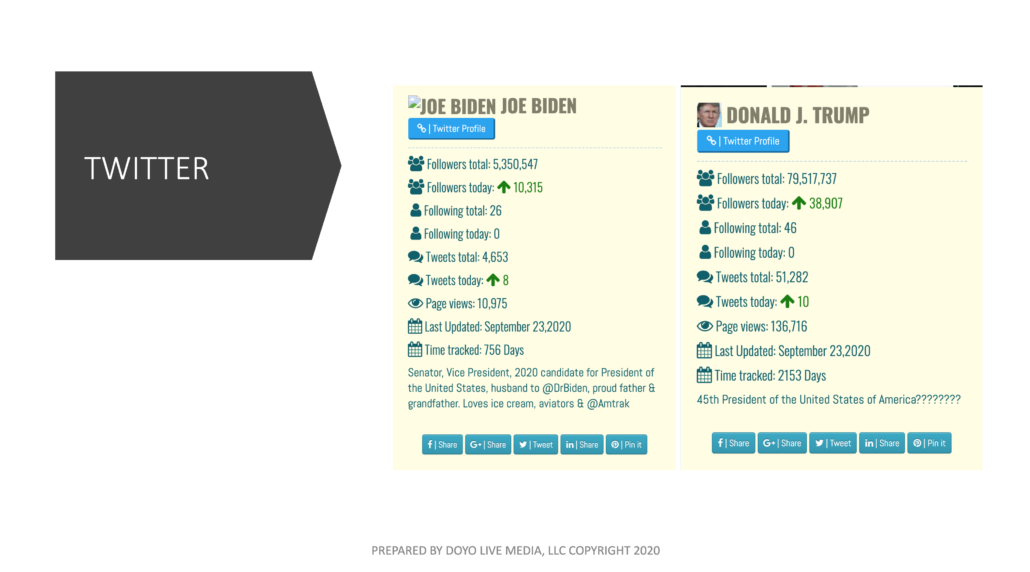 Where do we stop and end with Twitter. I know, you want to take Twitter away from Donald, however, his execution, audience, following, and the number of times he’s able to by-pass the news and go right to the people is the best use case for social media and why we don’t need traditional news media to tell our story. Biden’s got a lot of work to do in catching up and frankly, there’s not enough time. His Twitter account is very immature, he’s gained a significant following but nowhere near the universe of Trump. 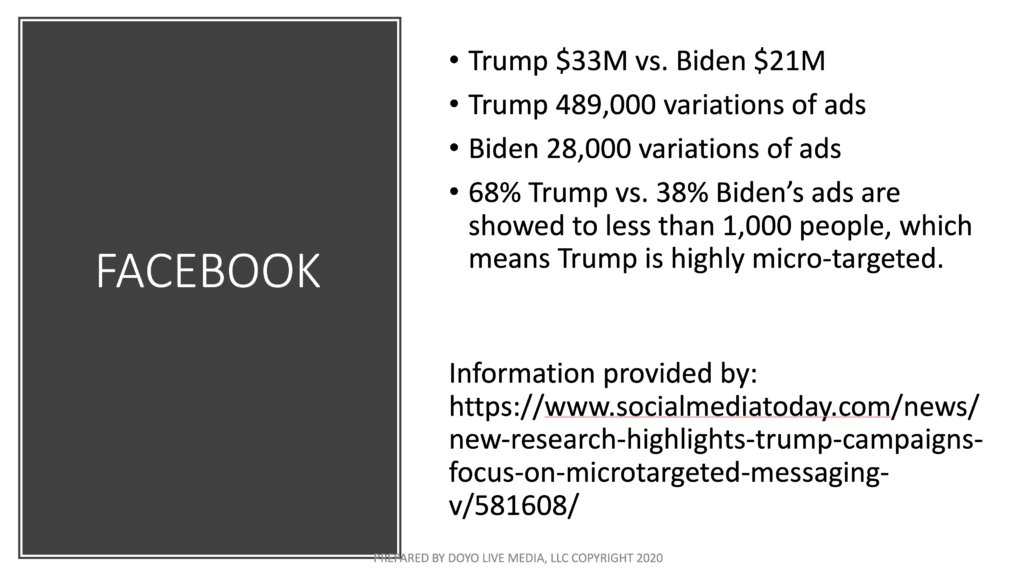 Again I will once again reference President Barack Obama who really dominated in his presidential runs because he understood or at least his political advisors understood the power of Facebook. You can also take out the controversy with Cambridge Analytic. Simply because within Facebook’s platform you can run ads at lookalike audiences something that is native to the Facebook platform, along with many other features that target individuals on financial status, geographic location, interest, and behaviors.

The one area that former VP Joe Biden seems to be outperforming current President Donald Trump would be TV. However in 2016 remember Hillary outspent Trump, however tactically Biden’s more focused on the battleground states and “Blue Wall States.” And another sign for Biden could be that in August he raised a significant amount of money. A late rally, not sure only time will tell. 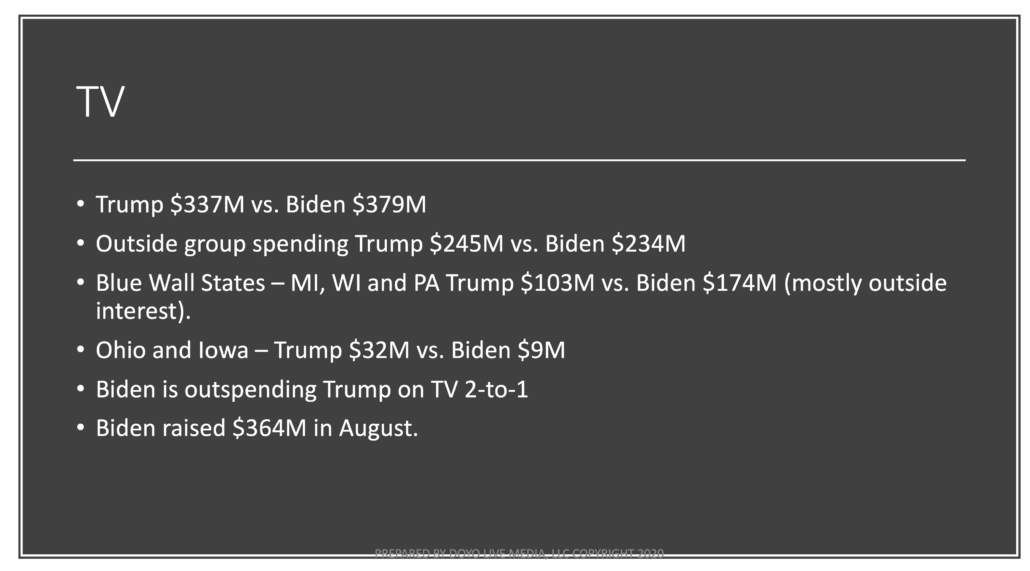 GET OUT AND VOTE

My parting shot…Is the main thing is you need to get out and vote. Figure out a way to get to the polls, early, late, mail-in, whatever it takes. I respect whichever way you are going to vote locally and nationally. The two biggest problems in America right now is that we don’t have enough healthy discourse when it comes to a difference of views, watch the Social Dilemma if you want to really start to hone in on why. The second even more important that the first is that our country to being ruled by the few because the majority doesn’t get out and vote and the establishment loves this…Career politicians don’t have to be held accountable when only 20% of the population is voting, that’s why it’s so important to VOTE.

Leave me a comment, be respectful, I’m open to discussion and answering questions, NOT NAME CALLING!!!

DOYO Live is dedicated to providing ongoing professional development for marketing, business, sales and design professionals through our online platform, in-person workshops and annual conference. We also provide marketing strategy and day-t0-day management of marketing and sales, we are not a marketing agency and not a consultancy, we sit someplace in the middle and drive the best possible results for our clients.

The ONE social media platform that most working adults have mastered is Facebook, and then likely they’ve branched out to Instagram, maybe noodling around the idea of Snapchat or TikTok. The reality is they should have mastered LinkedIn.

If you are a student, working professional, business owner, hell anyone in the working world, you should absolutely 100 have a LinkedIn account. If anything, it’s the world’s biggest business database.

In this episode of the DOYO Live Marketing Show Presented by iSynergy, I give it to your straight of how I’ve been using LinkedIn as a tool to grow my business and client’s businesses, since 2005!!!

DOYO Live is dedicated to ongoing professional development through online educational webinars, blogs, vlog, in-person workshops and our annual conference. We have speakers, sponsors and attendees that make up the DOYO Live community. In addition, we provide marketing consultation, primarily on lead generation through content marketing strategies and are leaders in innovative marketing tactics and strategies.