In the recent wake of Antonio Brown providing unprecedented access to the Pittsburgh Steeler locker room, after a recent playoff win, sending the Steelers to the AFC Championship Game. Which is only one victory away from playing in the most coveted football game in the universe, that being the Super Bowl.

There’s tremendous fall out in Steeler Nation. It all started when all-pro, wider receiver, the Dancing With The Stars, social media savvy Antonio Brown turned on Facebook Live in the Steelers locker room for 17 minutes. A fun video turned controversial, changed what we know about an NFL locker room right before our eyes.

And while Antonio is under intense scrutiny, which prompted swift action from Pittsburgh Steelers Head Coach, Mike Tomlin, criticism from St. Ben “Choir Boy” Roethlisberger, drew the ire of Steelers Nation and dominated the sports talk radio landscape. Contrary to popular belief, I don’t think it made Antonio, the Steelers or Mike Tomlin look bad.

In fact, I love all three even more now!!!

Before I get slammed by Steeler Nation on being a “true fan.” My love affair for the black and gold started in 1979 at the age of 5, when my mother dragged me to JC Penny in the Southern Park Mall in Youngstown, Ohio to pick out a winter coat. I had my choice of a Steelers or Cleveland Browns letterman’s jacket.

Big decision, probably the first, maybe the most important and quite possibly the best decision I ever made in my life, to pick out the one that was black with yellow faux leather sleeves and the helmet on a white patch on the upper right-hand side. I remember talking to my fake uncle on the phone (yes I’m from Youngstown, I had a lot of uncle’s growing up some were family some we just called uncle to keep it simple) that he was going to give me points in the very first Super Bowl, I can ever remember.

That was Pittsburg Steelers vs. the Vince Ferragamo, Los Angles Rams. I didn’t quite comprehend what giving or getting point was, I just wanted the Steelers to win.

I still believe that at the end of the 4-championship run that Terry Bradshaw, often left out of the best ever conversations is one of the 3-greatest quarterbacks to ever play the game. After the Steelers won in 79′ to cap off their dynasty.

The next decade and a half would be rough.

These weren’t the Jack Lambert, Donnie Shell, Joe Greene, Rocky Blier, Franco Harris, Lynn Swann and I can go on, in their prime Steelers. This was 16 years of the Louis Lipps, Bubby Brister, Mike Merriweather, all good players but could not put together a full-squad until 1996, very average Pittsburgh Steelers.

It sucked. The only thing I had to hold onto was the autographed picture I received in return from a letter I’d handwritten Lynn Swann and my memories of 1979. I believe the Rooney’s are the greatest professionals sports owners of all time and the Pittsburgh Steelers organization is the most well-run organization in all of sports.

I’ve been in the digital marketing landscape for over 10-years. I frankly believe this is probably the most profound, coolest, most innovated coverage for a professional sports league, that has been struggling with declining ratings all season and likely will change how we forever think about access in viewing events.

Why? Because it was fun, it was real and authentic. Reality TV at it’s best!

According to two league memos obtained by ESPN, teams no longer can shoot video inside the stadium during the game and post it on social media, nor can they use Facebook Live, Periscope or any other app to stream anything live within the stadium.

In conversation with the teams, sources said that league executives want to make sure that content generated within the stadiums, including game highlights, is hosted by team websites so that the league maintains control of what is disseminated. Read Full ESPN Article by Darren Rovell.

This article was published back in October. There are significant fines that come along with breaking a social media policy. While the NFL wants to control the brand, as do the teams. Sadly the NFL is placing a higher emphasis on breaking its social media policy, showing behind the scenes footage, access in NFL stadiums to players, locker rooms, and forbidden zones. Then their penalties issued against domestic violence, sexual assault, driving under the influence or worse.

Fines will range from $25,000 to $100,000 based on the offense. To put this in perspective. The National Football League fined Ray Rice $58,000 for conduct detrimental to league policy. In case you didn’t know, Ray Rice was guilty of punching his fiancee in the face, which was caught on video camera in an Atlantic City Casino.

Furthermore the same NFL that suspended Pittsburgh Steeler Quarterback 4-games for sexual assault, yes, that same QB, Ben Roethlisberger that initially criticized his all-pro wide receiver for breaking the violation of the code of where locker room stuff is private and off limits, and then once the emotion cleared said it was, “water under the bridge.”

Sadly the NFL is willing to levy a fine against an individual that has put various designs on his game shoes (Antonio Brown) that would be auctioned off for charity after the game and was thoughtful enough to put a social media policy in place that issues heavy penalties against and individual and/or team. But when an individual decides not to stand in honor of the men and women that have served this great nation, no action is taken, no fines issued and no warnings fired.

Life is obviously not fair. As polarizing as it is, a social media policy is not the point. But how I think Antonio Brown’s little 17-minute video will completely change how we interact with professional sports teams and athletes moving forward in the future.

This is a truly groundbreaking use of Facebook Live. Behind the scenes, real, authentic access to an otherwise place that has been off limits is just mesmerizing. Think about how quickly we got to where we did.

Just less than 10-years ago we were mad at the world because celebrity and professional athletes cut out the middle man (the media). And went right to the source. Mainly on Twitter, no longer relying on journalist, news, PR agencies and just said what they feel.

This gave all of us immediate access. To feel important, to get followed back by someone of fame, re-tweeted, liked, shared or commented. It gave us all an opportunity to feel that shine.

A website like the Player’s Tribune, giving athletes a voice. Built up millions of followers, regular contributors and a story from a different angle.

Look at how LeBron James left Cleveland in 2010. That was the epic public relations disaster of “I’m taking my talents to South Beach.” In my humble opinion Jim Grey, played the role of a complete hack incredibly well by starting the interview with a softball question, “Hey LeBron, how’s your summer going…” Completely staged, just 7-years ago. Blogs were popular, so was Twitter and Facebook. But that was 2010, we were still conditioned to call a press conference.

That is and was a complete joke. However, you look at the decision #2. When the prodigal son returned to Cleveland and I completely guessed wrong that the King would ever return. A completely different approach. James told the story to Lee Jenkins at SI.com and they published, I’m Coming Home. This still brings a tear to my eye. A heartfelt, blog type of article, I often refer to James’, “In Northeast Ohio, nothing is given, everything is earned!” Whenever I need a little motivation.

The story, the content, the delivery so polar opposite but so right. Everything that was wrong with the decision part-1, was rectified in part-2.

But you now have high school kids, remember, these are the kids that really have not been in the world without a smartphone. 2007, the iPhone came out. Jr. pretty much has been given a device to suffice them as an electric babysitter.

These same kids aren’t calling press conferences, they are taking to Instagram, Twitter, and Facebook to make their announcements of what college they are declaring to play big boy college football. In fact so is the recruiting process. Coaches and players (future) are communicating via Twitter, they are watching to see if players start following teams, alumni, or games on Instagram.

Social media platforms, websites, blogs are all enabling athletes, people of celebrity to provide us access. I love the access that is behind the scenes footage. At this point, I feel like we’ve seen it all. And unfortunately, it’s not real. The fact that we got to see Pittsburgh Steelers’ Head Coach, Mike Tomlin show some real raw emotion after a game was awesome, I’m all in.

I’m so exhausted of the cliche’ answers of taking it one game at a time, that was a really good team, we want to give them all the credit in the world and our next opponent is going to be really tough. Great, insert name, team, and coach here…That’s no different than the next guy.

Who cares about bulletin board material. Every team, athlete, coach, fan nation has us against the world chip on their shoulder.

When LeBron and the Cavs were playing the Golden State Warriors last year in the NBA Finals, it was Ohio against the world. Really, is the world really against the salt of the land, hardworking, friendly, midwesterners in the Buckeye state?

Facebook Live is amazing, my recommendation is that the NFL needs to reconsider this policy. As a matter of fact Major League Baseball, NBA, MLS, are you listening and paying attention. Figure it out now…Give your teams, players, managers, and coaches the ability to incorporate streaming video to connect with the fan base. My prediction is that as Twitter changed the game giving athletes the ability to self-publish, we will look back at the Pittsburgh Steeler Locker Room Facebook Live-Gate as the pivotal moment that changed live streaming social media for professional sports. We will look back and laugh that it was absolutely silly to have Antonio Brown publically apologize for his actions.

This will eventually be the norm, and when that day happens, I cannot wait. Because it’s going to be very cool to see, hear and experience things about the game that make it more real, authentic, transparent, as this will drive huge engagement.

Once the NFL figures out how to monetize the platform all this nonsense is going to go away.

Besides Facebook is likely going to have a huge presence with running ads during the game and fans going live. It would be awesome to see what’s going on with the players, and experience media day, the travel, all of it, for the most watched football game on the planet.

DOYO Live founder, Dennis Schiraldi, is a local entrepreneur that grew up in Youngstown and held positions as a marketing executive in Cleveland, New York City, and Columbus, Ohio. He moved back to Youngstown three years ago to help with the revitalization of the Mahoning Valley. 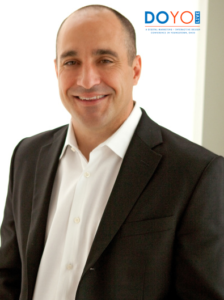 In the process of speaking and attending a number of national conferences, Dennis got an inspired idea to create a world-class digital marketing and interactive design conference right here in Youngstown.

DOYO Live is dedicated to the ongoing professional development of marketing, business, sales and design professionals. We accomplish this through our online ecosystem, in-person workshops, and our annual conference.

We strive to help stimulate the economy of Youngstown and give back with money and time to area charitable organizations.