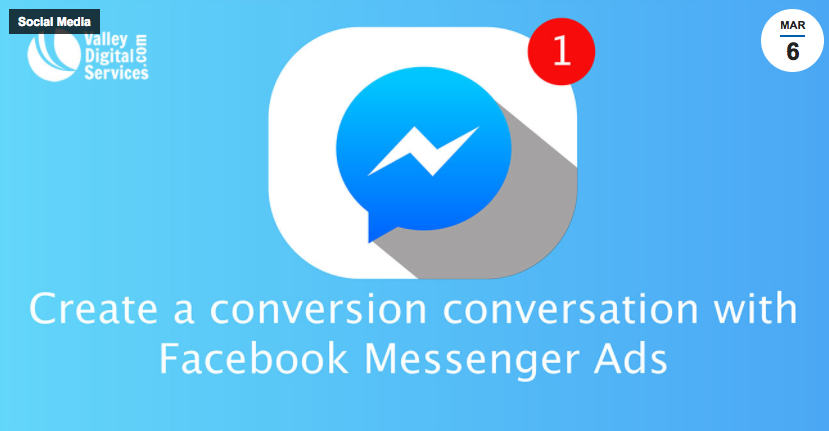 Facebook has been approaching maxing out its ad slots usage in your newsfeed for some time. In July of last year, Facebook CFO David Wehner anticipated that ad load would be steadily increasing for the coming year. But there was only so much space that Facebook could fill your newsfeed up with ads. So, the question was posed of how they could continue to increase revenue from advertising.

In early 2015, research showed that usage of messaging apps was higher than the usage of the top four social networks. In fact, it showed that over one billion people use Facebook Messenger. Therefore, it is no surprise that Facebook decided to finally utilize this platform as a way to continue to increase revenue by further expanding its ad load out of your newsfeed and into your messenger app.

How to use Messenger Ads

Messenger ads can also be utilized for retargeting in a way you might expect. If a user visits the web page but does not make a sale they will then see a Destination ad in their newsfeed asking if they have any questions, for example, and directing them to speak to a representative by clicking the ad.

The other type of Messenger ad is the Sponsored ad. These can only be received by customers who have initiated a conversation previously by sending messages to the brand’s page in the past. When a user receives a sponsored Messenger ad it appears just like a message from a friend in the Messenger app only coming from the brand page.

Certain services can be used to help businesses utilize Facebook Messenger ads. The most popular of which is ManyChat, that allow business’ to easily set up their own messenger bot but also to set up subscriber lists and broadcast sponsored messages through the Messenger app.

The nature of the Messenger ad does cause some concern among both consumers and marketers for the potential of turning users’ Messenger apps into spam inboxes. Up until now, when you received a message on Facebook Messenger you could count on it being from an acquaintance that you knew. Now there is the potential for brands to directly have conversations with customers. Adding to that, there is the potential for the marketing intention to become misleading or misunderstood on the part of the potential customer or unknowing recipient of a sponsored ad. And further still, it is now easier than ever for businesses to set up chat bots to not only converse but reach out to potential customers. With sponsored messages in mind, it begs the question as to how much of this kind of marketing outreach can Messenger users expect to start receiving.

This is something that Facebook is confident it will take seriously and be sure to actively keep limited. David Marcus, Facebook’s VP of Product for Messenger assured TechCrunch in this article that they were “paranoid” and that the Messenger ads “will definitely be limited.” This reassurance came in April of last year before Messenger was released and since then we have learned that sponsored messages can only be received by users who have sent messages to the brand’s page. Nevertheless, the potential for spam remains.

No doubt, the internet has opened many new and unexpected opportunities, both good and bad, for social interaction and monetary gain. As Facebook continues to hold its position firmly at the top as the most popular social media platform, they continue to expand outward in their potential for what they can do for users and how they can profit from doing it. With Messenger ads, businesses will be able to utilize this new marketing platform to their advantage. Now perhaps the question remains whether users will be able to tolerate it. If Facebook can be as careful and aggressive as they claim they will be in controlling the abuse of Messenger ads, it will be beneficial for everybody.

DOYO Live is a digital marketing and interactive design conference that was founded by Dennis Schiraldi in 2016. This event is dedicated to the ongoing professional development of marketing, sales, business and design professionals through our online assets, in-person workshops and annual marketing conference.

Last year our event sold out, over 200+ attendees and we are anticipating the same this year. Our marketing conference in Youngstown, Ohio will be held on August 2 & 3, 2017. Early bird tickets are currently on sale for $150, but those prices will not last. We are announcing our breakout session leaders over the next couple of weeks. We will be expanding our conference in 2017 to have 2-hour deep dive workshops on August 2 and our all day conference on August 3. Register today!

Youngstown Digital Marketing Meetup – Let’s Get Creative The Startup Story of FoodECrave.com: Bootstrapping Disruption in a Digital ...
Scroll to top

This site uses cookies. By continuing to browse the site, you are agreeing to our use of cookies.

We may request cookies to be set on your device. We use cookies to let us know when you visit our websites, how you interact with us, to enrich your user experience, and to customize your relationship with our website.

Click on the different category headings to find out more. You can also change some of your preferences. Note that blocking some types of cookies may impact your experience on our websites and the services we are able to offer.

These cookies are strictly necessary to provide you with services available through our website and to use some of its features.

Because these cookies are strictly necessary to deliver the website, refuseing them will have impact how our site functions. You always can block or delete cookies by changing your browser settings and force blocking all cookies on this website. But this will always prompt you to accept/refuse cookies when revisiting our site.

We fully respect if you want to refuse cookies but to avoid asking you again and again kindly allow us to store a cookie for that. You are free to opt out any time or opt in for other cookies to get a better experience. If you refuse cookies we will remove all set cookies in our domain.

We provide you with a list of stored cookies on your computer in our domain so you can check what we stored. Due to security reasons we are not able to show or modify cookies from other domains. You can check these in your browser security settings.

We also use different external services like Google Webfonts, Google Maps, and external Video providers. Since these providers may collect personal data like your IP address we allow you to block them here. Please be aware that this might heavily reduce the functionality and appearance of our site. Changes will take effect once you reload the page.